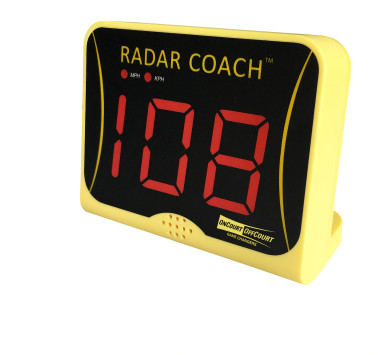 Competitive athletes know how hard they can hit, kick, or throw a ball. With the affordable Radar Coach™ you can as well. Radar feedback helps you improve your skills and it’s fun! Measure your ball speed in a variety of sports including tennis, pickleball, golf, baseball, softball, football, soccer, hockey, volleyball, and more!

(WARNING: Never aim directly at the Radar Coach™ without having a net or other protection guarding the unit.)

 Lightweight and easy to use. Unlike most radar sensors, the Radar Coach™ does not require a second person to point the unit at the object. Simply place it behind the target goal or net.

 Tripod (included) makes it possible to adjust the Radar Coach™ to different angles for most accurate reading.  The bright LED display is easy to read from a distance.  The Radar Coach™ has a speaker with a pre-recorded voice that announces ball speed.  BAG pictured is included

 Automatic battery saver extends the life of the batteries when the device is not in use.

 Stores the speed of your last ten shots.

1. Push the “On/Off” button to start and stop the device.

2. Push the “MPH or KPH” button to choose a unit of measurement. The LED light will indicate your choice.

3. Push the “VOICE” button to have a speaker announce the speed. Push again to turn off.

5. STILL MODE: Speed range from 3-150 MPH (5-199 KMH). STILL MODE might be best used to measure a ball throwing machine when there are no moving parts except for the ball being thrown from the machine that can interfere with the unit recording the ball speed.

ADDITIONAL SUGGESTIONS FOR USE

1. Always place the Radar Coach™ behind a goal or net to protect the unit from being struck by a ball.

2. Make sure that the distance between the Radar Coach™ and the item being measured is no more than 40 feet (12 meters) away from the unit, and no less than 3 feet (1 meter) for the most accurate readings.

3. You may find that the tripod (included) provides a more accurate reading, but the unit can also be placed directly on the ground.

4. For best results, face the Radar Coach™ so the object flies in as direct a line as possible towards the sensor.

5. There are certain mathematical phenomena that could affect the accuracy of measurement. One of these is the Doppler Effect that measures the relative speed of an object as it approaches the sensor. The measured speed becomes less accurate when moved off this direct line. This phenomenon is called the Cosine Effect. While radar guns cannot deliver 100% accurate readings, the Radar Coach™ is sensitive enough for the relative results to stimulate improvement, identify differences, and create high-performance incentives. Expect a reading within 5% of the actual speed of the ball or object being measured.

This product hasn't received any reviews yet. Be the first to review this product!