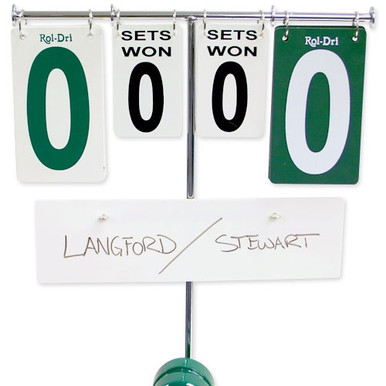 Players and coaches can focus on the game instead of worrying about keeping score when this RolDri® Manual Tennis Scorekeeper is set up on the court. As the competition heats up, athletes playing in singles or doubles matches can deliver high-velocity serves and shots, checking the scorekeeper to see how they're stacking up against the opposition. From behind the service line or the top row of the stands, the large game numbers and customizable name plates are easy to read, making it simple to stay informed about the status of the game or set.

This product hasn't received any reviews yet. Be the first to review this product!